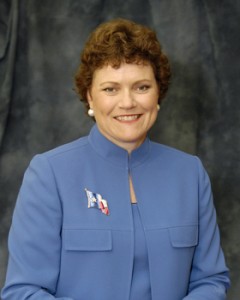 Born on October 24, 1957, in Waukegan, Illinois, Kimberly Olson spent most of her youth in New Hampton, Iowa.

She entered the Unites States Air Force in the late 1970s. When she applied for military flight school during officer training, she was turned down. Gender was the official reason. She petitioned the Air Force to allow women to compete for acceptance into flight training school, and the Air Force acquiesced, allowing women, for the first time, to enter pilot training directly from Officer Training School.  In 1980 Second Lieutenant Kimberly Olson became the first female to enter undergraduate pilot training at Laughlin AFB, Texas.

Beginning her military flight career as a KC-135 Stratotanker air refueling pilot, she soon progressed to instructor, serving as assistant flight commander, instructor pilot, and executive officer at training bases in Arizona and Texas. At the Pentagon, she contributed to the Department of Defense Task Force on Women in the Military, which ultimately led to assignment of the first women pilots to the U-2 Reconnaissance aircraft. Back in Texas, she became an instructor pilot in the T-1A Jayhawk, laying the foundation for the Air Force’s dual track pilot training program.

Kim’s leadership skills became as renowned as her flying skills. She led pilots into missions over Iraq, Saudi Arabia and Kosovo.

In 2006, she published her book – Iraq and Back: Inside the War to Win the Peace.

Kim retired in 2005 with the rank of Colonel, one of only a dozen female pilots to achieve that honor.  She currently lives in Weatherford, Texas.