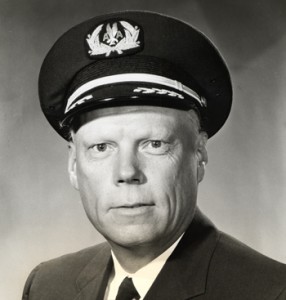 Born in Lanyon, Iowa in 1912, Wilmer (Bill) Reedholm grew up in nearby Boxholm. When he was nine, a barnstormer landing near Lanyon gave him his first flight, thus beginning a lifelong passion for aviation. In 1928, when Bill was 16, he received his private pilot’s license. At the age of 18, he became the youngest flyer in the United States to receive his transport license, allowing him to fly mail planes and make transcontinental commercial flights.

For the next several years, he made a living barnstorming. In 1938, Bill joined American Airlines as a First Officer and was soon promoted to Captain. During World War II, he was assigned to Air Transport Command, where he flew more than 200 flights over the Atlantic and was instrumental in the development of the inertial navigation system that replaced navigators. In 1948, he was a member of the first crew to participate in the Berlin Airlift. In 1966, Bill was named Director of Flying Operations for American Airlines and organized the Vietnam Airlift Service for the Military Airlift Command. He flew test flights of the Boeing 747 and supervised the first deliveries of the craft to American Airlines. In 1972, Bill retired from American Airlines as Vice President of Flying Operations and once again donned his pilot’s uniform, flying a regular run from Chicago to Sydney, Australia.

During his nearly 50 years of flight, he logged more than 31,000 hours and several million miles in the air.