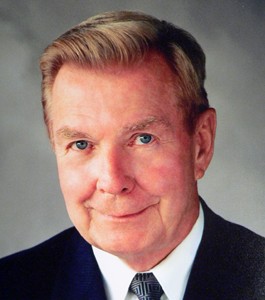 Born October 11, 1930, Jerry Dwyer developed his love for flying at an early age. At the airport near his home, he mowed runways and scrubbed the hangar to pay for flying lessons. He started flying at 13 years old. At 15, he purchased his first airplane then received his pilot’s license the following year.

In 1949, after studying aeronautical engineering at the University of Illinois, Jerry moved to Indianapolis, Indiana. He worked for aviation pioneer, Roscoe Turner at Ozark Airlines as an A & P. While there he joined the Air National Guard. Jerry was soon called to active duty in the Korean Conflict in the capacity of aircraft mechanic.

In 1952, at Sioux City, Iowa, Jerry worked for aviation legend, Tommy Martin, who encouraged him to continue his aviation career. After relocating to Oelwein, he established Dwyer Aircraft Sales, Inc. In 1954, he relocated again to Charles City and finally, in 1957, to Mason City to manage the airport there. Jerry became one of the youngest Cessna dealers in the country. He also started one of the first commuter flights from Mason City to Minneapolis.

Jerry has taught hundreds how to fly. Many of those students now fly for commercial airlines or as corporate pilots. He has personally logged over 40,000 hours.

Jerry lives in Clear Lake, Iowa. He continues today as President of Dwyer Aircraft Sales, Inc. He has weathered the ups and downs of aviation by adjusting the services his business offered as needs arose.