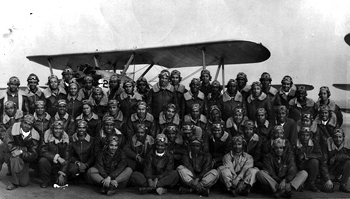 In the early 40s, the military believed that black people lacked adequate skills to operate or maintain sophisticated military aviation equipment. Despite much pressure, it seemed nothing would change their minds.

In 1941, thanks to a lawsuit filed by Yancy Williams, African-Americans were finally allowed to serve their country as members of the United States Army Air Corps. Nearly 1000 trained to be pilots at a segregated training facility in Tuskegee, Alabama and more than 10,000 men and women served as support personnel.

The Tuskegee Airmen were trained as bomber escorts. The group's leader, Colonel Benjamin O. Davis, told the pilots that their mission was to escort bombers safely to and from their targets, not to see how many enemy aircraft they could shoot down. They became so proficient at their jobs that they were often requested by bomber pilots. The tails of their P-51 Mustangs were painted red which earned them the nickname of the "red-tailed angels."