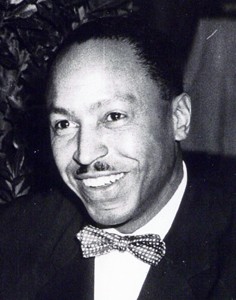 In 1938, Joe graduated from high school first in his class. During his two years at Ellsworth Community College in Iowa Falls, he took a class in flight instruction.

After enlisting in the Army in 1942, he was one of the first four Iowans to be sent to Tuskegee, Alabama, part of a new program established by President Franklin Roosevelt to train black pilots. He was a second lieutenant in the segregated 332nd Fighter Group which served as escorts to the 15th Air Force. The “Red Tailed Angels,” as they were called by the white bomber pilots (after the distinctive markings on their planes), never lost a bomber to the enemy. Gomer himself flew 68 combat missions in both a P-47 and a P-51.

Joseph Gomer fought racism as well as the Germans while serving in the Air Force, but remained in the military after the war. He became the first black Iowan to be an officer in the United States Air Force. He was still in service when President Harry Truman desegregated the military.

After retiring from the Air Force, Joe worked for the U.S. Forestry Service for 21 years, where he earned meritorious recognition for his work providing equal opportunities for minorities.

Joseph P. Gomer currently lives in Duluth, Minnesota and devotes much of his time speaking about his wartime experiences.