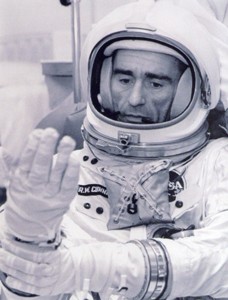 Walter Cunningham was born in Creston, Iowa on March 16, 1932. When he was a child his family moved to Venice, California where he graduated from high school. He joined the Navy in 1951 and began flight training. He served with the United States Marine Corps and the Marine Corps Reserve. He retired with the rank of Colonel.

He attended UCLA, receiving a Bachelor of Science and a Masters of Science degree in Physics. He also attended Harvard Graduate School of Business.

Walter Cunningham was Iowa’s first astronaut. While working as a scientist for the RAND Corporation, he was selected by NASA as one of the third group of astronauts, the second civilian in the program. During his eight years with NASA, he contributed to the design, development and testing of all the major operating systems of the Apollo spacecraft, specializing in electric power systems and complex systems analysis. On October 11, 1968, he occupied the lunar module pilot seat for the eleven-day flight of Apollo 7, the first manned flight of the program.

Following the Apollo 7 mission, Walt’s assignment was as Chief of the Skylab Flight Crews. In this capacity, he was involved in the design, development and integration of systems for five different manned space modules, two separate boosters, and fifty-six major scientific experiments.

Today, Walter Cunningham is a successful businessman living in Houston, Texas. He is also a professional speaker and author of the book, “The All-American Boys”, a no-holds barred candid memoir of the astronauts with all their strengths and weaknesses, revealing what it takes physically and mentally to be an astronaut. He also hosts Lift-Off to Logic, a radio talk show.