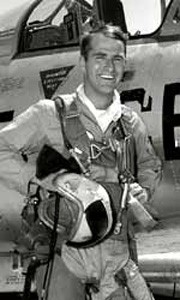 At Edwards Air Force base in California, Lou became a test pilot under Brigadier General Chuck Yeager. He was the first to fly the F-104B and the F-104G.

Lou joined Lockheed as an experimental test pilot in 1957. Two years later, he was chosen to work closely with “Kelly” Johnson. Mr. Johnson’s “Skunk Works” team was a super secret organization that was able to take risks and break with standard practices in order to develop highly successful aircraft. Lockheed’s Skunk Works was responsible for building such advanced aircraft as the P-80, F-104, the U-2 and the SR-71, still the world’s fastest and highest flying aircraft.

During his aviation career, Louis Schalk flew more than 70 different aircraft and amassed 5000 hours of flight time. He was a member of the Roadrunners—those that built, flew and maintained the CIA’s Blackbirds. As an Air Force pilot he was trained to fire cannons and drop bombs, but in reality he became a Cold War warrior through his heroic exploits as a pioneering test pilot.