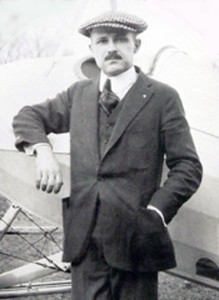 Carl Sterling Bates was born in Clear Lake, Iowa, in 1884. At age fourteen, he built and flew the first gilder to be flown in Iowa. This was accomplished by having the glider towed by a horse.

Carl attended the Armour Institute of Technology in Chicago where he continued his work with gliders under the tutelage of pioneer aviatior Octave Chanute.

He set up a workshop to build airplanes. When an engine was not available he built one himself, designing a lighter, two-cylinder, 10 to 12 horsepower motor with a smaller, faster propeller. Improving on the designs of the Wright brothers and Chanute, he devised a single rear vertical rudder and a single horizontal rudder in front and used a tricycle landing gear with a swivel front wheel that made taxiing easier. The new design allowed aircraft, for the first time, to be able to take off from any surface without using a railroad-type track. He took one of his new aircraft to Daytona Beach, Florida where he won by default the first ever airplane race, and on the same day lost the first ever race between a car and an airplane.

Bates wrote many articles for Popular Mechanics and aviation magazines. After World War I he initiated a business called Creative Engineering and designed and built several innovative products for industry, home and pleasure.