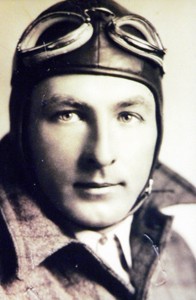 Ralph Weberg was one of three brothers who started Weberg Airways, Inc., at Denison. At a time when it was the only commercial airport between Sioux City, Des Moines and Council Bluffs, Ralph was the only brother who was interested in becoming a pilot. His time in the service during WWII helped to create his interest in flying.

Weberg raised stock cattle on his farm south of Denison. He would ship his livestock to Chicago markets via train. The next day he would fly to the city to be on hand for the sale of his cattle. He was known by such titles as, “America’s Flyingest Farmer” and “the Flying Farmer of Iowa.”

On August 24, 1930, Weberg Airways, Inc., was dedicated as Chamberlin Field, in honor of Clarence Chamberlin, the Trans-Atlantic flier, also from Denison. Chamberlin and Weberg were classmates. The event brought the largest crowd ever to Denison, establishing the first fly-in.