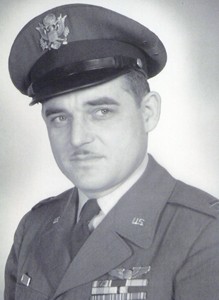 Hartley A. Westbrook was born January 29, 1919 near Letts, Iowa. While attending what is now known as the University of Northern Iowa, he took initial flight training from John and Bite Livingston. He completed his training after joining the United States Air Force in 1942.

During World War II he was assigned the command of a B-24. On his 18th mission, his bomber was shot down and he was held captive for two years at Stalag Luft III in Sagan, Poland until being liberated by General George Patton.

In 1949, Hap served during the Korean war as a VIP transport pilot and instructor. After serving two years, he returned to Iowa and helped establish the Iowa Air National Guard in 1954. During the flood of 1958, he flew a helicopter to rescue many who were stranded by the rising water of the Nishnabotna River in western Iowa. He remained in the guard as an instructor in both helicopters and fixed wing aircraft until his retirement as a Lt. Colonel in 1968.

In 1967, Hap created the Aircraft and Powerplant program at Iowa Western Community College in Council Bluffs. He wrote the curriculum and also purchased the aircraft and equipment.

Instilled with the love of flying, he started Hap’s Air Service in 1946 at Guthrie Center, then moved it to Ames where he continues today as President.