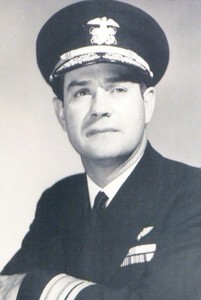 Rear Admiral Harold Blaine “Min” Miller, was born January 4, 1903, in Newton, Iowa. In his early teens he moved to Murphy, Iowa, to live with his grandparents on the family farm.

Harold moved to California while he was still a teenager. He studied diligently for the exam to get into the U.S. Naval Academy. He received his appointment  to Annapolis, MD, graduating in 1924. He entered Flight School at Pensacola, Florida. He qualified as a naval aviator when aviation was still in its infancy. In the 1930’s, he became involved with the great airships built for the Navy, the U.S.S. Akron and the U.S.S. Macon. Harold was a pilot for one of the five F9C-2 Sparrowhawk fighter biplanes hangared inside the large airships which were at the time, the world’s largest helium-filled, aluminum-framed dirigibles ever built. In 1945, “Min” became the  Navy’s youngest Rear Admiral at the age of 42.

Upon his retirement from the Navy, Harold became Vice President of Public Relations for Trans World Airlines and later for Pan Am World Airways. He served as Executive Director of the Congressional Aviation Policy Board as well as many other official appointments.

Harold wrote over 300 articles and published four books, including a history of naval aviation.