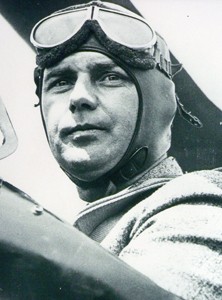 Charles W. Gatschet was born in Salina, Kansas, December 4, 1896. He joined the U.S. Army’s pilot training in 1917. He instructed aviation cadets before going to France as a Signal Corps pilot.

In 1919, he built and flew his own airplane from designs published in Popular Mechanics. He became a barnstorming pilot and on occasion, flew with Charles Lindbergh. For the next four years, he worked for American Eagle Aircraft Company and Nicholas-Beazley Airplane Company in Missouri as a test pilot and instructor.

In 1928, Charles moved to Des Moines, Iowa and became the Des Moines Register and Tribune’s first pilot-photographer-reporter. He flew the first seven of the newspapers’ eleven airplanes during the next fourteen years. As a result of his extensive aerial news coverage and other aviation activities, aviation awareness was elevated throughout the state.

Gatschet started and operated his own high altitude photo-mapping company in Des Moines in 1936, the Iowa Aerial Surveys Company, which was awarded a government contract to map the state of Iowa. The project took four years to complete.

In 1942, Charles returned to military service in World War II. In April of 1945, at the age of 48, he was killed in the crash of a Curtiss C-46 air cargo transport, while checking out a pilot on takeoff at Karachi, India.

Charles Gatschet pioneered aviation safety, becoming the first chairman of the Iowa Aeronautics Commission. He was recognized by many as the “ambassador” of aviation for Iowa and a respected leader in the aviation profession.