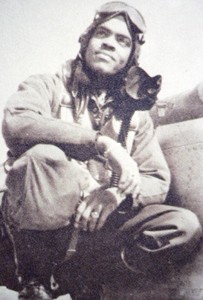 Robert W. Williams was born in Ottumwa, Iowa on September 21, 1922. His father became a pilot and encouraged his sons to learn. They became three of the total 102 black pilots in the United States at that time.

When the Japanese attacked Pearl Harbor, Bob tried to join the Army Air Corps but was at first denied due to the color of his skin. Eventually allowed to join, he received his training at Tuskegee, Alabama, a segregated facility which trained about 450 black pilots. He graduated third in his class.

The 332nd Fighter Group became the 1st squadron of black combat fighter pilots who overcame racism for the right to serve their country. They destroyed 260 enemy planes, damaged an additional 148 and sank a Nazi ship. Not one U.S. bomber was lost while flying under their protection.

In 1952, Bob wrote a story of his experiences as a fighter pilot. He persevered over the next 43 years to get his story told. In 1995, the HBO movie, “THE TUSKEGEE AIRMEN” aired, educating a nation to the accomplishments of these American heroes.

Robert Williams was awarded the Distinguished Flying Cross, the Air Medal with six oak leaf clusters, and the Presidential Distinguished Unit Citation, among others.