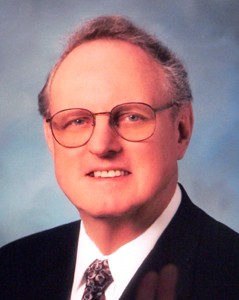 Born in Talmage, Iowa on October 22, 1930, Elvin F. Knotts grew up in the Afton and Creston area.

In 1951, Elvin joined the United States Air Force. He had a varied career which included being a radar operator, radar mechanic and all-weather fighter-inceptor pilot.

He received a B.S. degree in Aeronautical Engineering from Iowa State College. He was employed by North American Aviation (which would become Rockwell International) participating in projects including the Apollo lunar landing program, the Air Force Gemini program, Mars and Venus aerobraking, and the Space Shuttle program for both NASA and the Air Force, Elvin’s research and designs made it possible for manned space vehicles to re-enter the earth’s atmosphere. He worked with trajectory, guidance and subsystem design studies.

Elvin participated in the preliminary design and proposal, then the design, development, testing, evaluation and operation of the Space Shuttle. This included the team development of the Simplified Thermal Protection System Model, formulated and implemented an entry guidance algorithm, and selected trajectory profiles for operational Space Shuttle missions.