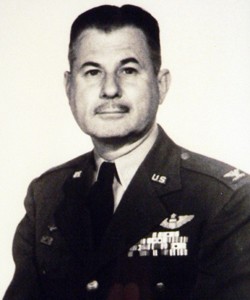 Born in Brooklyn, Iowa, Avery Ladd, worked and flew for Midwest Aviation Corporation of Omaha, Nebraska. He qualified for federal aircraft and engine license and also transport license in 1930. He was an instructor and a charter pilot for the Des Moines Register and Tribune.

In 1939, “Jack” joined the Royal Canadian Air Force as an instructor and check pilot. In 1942, the United States Army Air Corps gave him the rank of Captain. He became an instructor on B-17s. In 1944, he went to India and China, flew 20 combat missions and 25 trips over “the Hump.”

Colonel Ladd flew a C-54 aircraft in support of the 1st atomic bomb tests in the Pacific which were called “Operation Cross Road.” He also commanded the 1st Transport Unit for the Strategic Air Command after it was formed.

Over the next 13 years, he continued to be an instructor and test pilot. He retired from the United States Air Force as the Colonel with the most flying time of any pilot at that time.