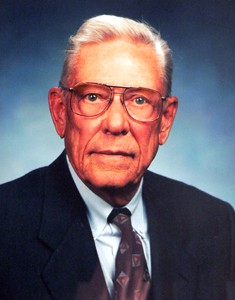 In 1935, while employed by International Harvester Truck Division, Herbert Elliott became interested in flying, and with the money he saved playing bass fiddle at night, purchased a Curtiss, Jr. He became associated with Delbert Clayton, who at that time was a Piper distributor and when Mr. Clayton left him with the Piper Distributorship, Elliott Flying Service began at Cram Field in Davenport, Iowa.

In 1938, with wife Arlene as bookkeeper, he operated a small airport at DeWitt, Iowa. After Pearl Harbor, Herb went to the Army Primary School at Bonham, Texas, as a flight commander. After learning that pilots were needed in the ATC at the Fifth Ferry Group in Dallas, he was commissioned a second lieutenant and spent two and a half years ferrying airplanes all over the world, as well as serving as chief pilot for the transition department.

Herbert Elliott has worked diligently to advance aviation in Iowa. He, Arlene and their employees have received many awards over the years, including Beechcraft Team of the Year in 1976, NATA Distinguished Service Award, and Junior Achievement Hall of Fame.