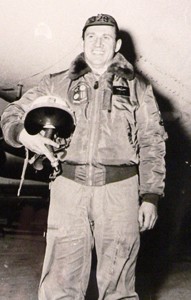 Born November 8, 1922 on a farm two miles south of Deloit, Iowa, in Crawford County, Charles Fink was introduced to flying as a teenager. He picked corn by hand to earn money for flying lessons, soloing on March 22, 1942.

In 1943, he joined the Army Air Corps Aviation Cadet Program and became the youngest B-24 bomber pilot in the European Theater during World War II. He completed 35 missions in 6 months.

Joining the Air Force Reserve Unit in Nebraska after the war, he was called for active duty for the Korean War in 1951. In 1957 a secret mission, “Operation Power Flite” was launched to prove to the world the U.S. had intercontinental bombing capabilities. Three B-52s were assigned to the mission with Captain Fink commander of the “Lonesome George” jet aircraft. The 45 hour, 19 minute flight on January 16-18, 1957, was the first non-stop jet flight around the world. Each crew member received the Distinguished Flying Cross and also the McKay Trophy for the most meritorious flight of the year.

Chuck lives today in Merced, California, where he is still a corporate pilot and volunteers at the Castle Air Force Museum. Chamberlin-Fink Field at the Denison Airport was named after Chuck and fellow Hall of Famer, Clarence Chamberlin.