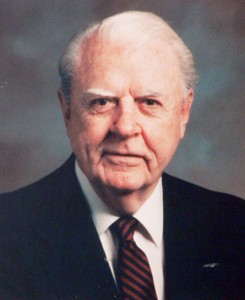 From the pioneer days of barnstorming to sleek, swift jets, Ralph E. Piper has witnessed the growth of aviation from a cockpit. Born on October 22, 1912 on a farm near Liscomb, Iowa, Ralph’s time in the air totals twenty-four hours a day for two full years.

His command of flying began in Iowa, grew during World War II in the China-Burma-India Theater and matured in corporate aviation for the Monsanto Chemical Company. Ralph soloed in 1938 and was a ground and flight instructor for the Livingston brothers in Waterloo. He attributes his flying ability to John Livingston who he considers “one of the greatest of pioneer airmen.”

During World War II, Ralph successfully flew 60 round trips in C-87s transporting various cargo from India to China. These were unarmed flights in undesirable weather conditions over the treacherous Himalayan Mountains. Casualties from flying “the Hump” exceeded those of combat troops during the war. Ralph’s successes earned him the Air Medal, the Distinguished Flying Cross and a Presidential Citation.

Because of his military achievement, he was in demand as a pilot during the post war years. Monsanto hired him as their chief corporate pilot. In this capacity Ralph was instrumental in developing safety training programs for corporate flying. He insisted on up to date communication and navigation equipment. He volunteered his time and energy to the development of the National Business Aircraft Association where he was a board member and served fifteen years as chair of its Technical Committee.

Ralph has received many honors for his life’s work including the prestigious Spirit of St. Louis Aviation Award. In 1990 his autobiography, Point of No Return, which also parallels the development of the aviation industry, was published.