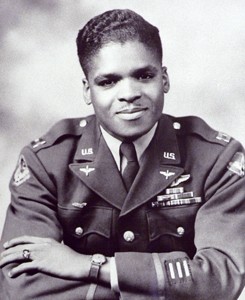 Born in Des Moines, Iowa in 1920, Luther Smith became a WWII hero and an aerospace engineer who made significant advances in aviation.

Luther was introduced to flying at the age of 13 while riding in a Ford Tri-Motor. On July 15, 1941 he soloed through the Civilian Pilot Training Program at the Des Moines Flying Service. At the age of 21 he was the first African-American from Iowa accepted in the U.S. Army Air Corps and was commissioned as a Second Lieutenant for training at Tuskegee, Alabama.

During WWII he flew 133 successful missions, destroying two enemy aircraft in the air and another 10 on the ground. On an escort mission in October, 1944, his P-51 was severely damaged during a bombing of an oil tank freight yard. When the plane’s engine burst into flames, Luther knew he had to parachute out but he became trapped in the cockpit. Subconsciously he pulled the parachute’s rip-cord which jerked him from the plane. He crashed through trees in the landing fracturing his hip and came to rest on a tree branch. German soldiers freed him from the tree and transported him to a military hospital in a Yugoslavian village. Eventually he was transferred to a German POW camp in Austria. When he was released from the camp at the end of the war he weighed only 70 pounds. For the next two years he was hospitalized and endured 18 operations. He retired from active military service in 1947 as a Captain.

He first worked at GE in Schenectady, New York and from 1961 until 1988 he was at the Missile and Space Operation in Philadelphia advancing to various management positions. He has been awarded two patents for dynamic sealing devises in aircraft.