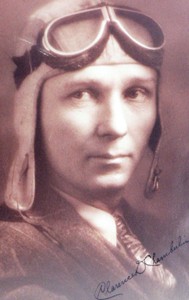 A Denison, Iowa native, Clarence Chamberlin made flying history more than once in his lifetime.

He was born, raised and educated in Denison and attended Iowa State College in Ames. His interest in things mechanical lead him to challenge the skies in the pioneering days of aviation. His first air adventures consisted of barnstorming throughout the eastern part of the United States after World War I.

In June, 1927, 14 days after Lindbergh successfully flew the Atlantic, Clarence became the first pilot in history to fly a passenger across the Atlantic Ocean. Earlier that year, in April, Clarence and Bert Acosta set a world endurance record by keeping their airplane aloft 51 hours, 11 minutes and 20 seconds. On August 1, 1927, he flew an airplane carrying mail off the deck of the luxury liner, the U.S.S. Leviathan, which was 125 miles at sea. This was the first ever ship-to-shore mail flight.

Years after retiring, Clarence commented in an interview, “I don’t know how we ever did the things we did in those days and survived.”