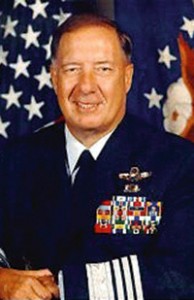 Lt. General Charles Horner was born, raised and educated in Iowa. On October 19, 1936, General Horner was born in Davenport then lived 14 years in Centerville and next moved to Des Moines where he graduated from Urbandale High School in 1954. He graduated from the University of Iowa in 1958 and as an ROTC Cadet was commissioned as a second lieutenant in the Air Force. His pilot wings were awarded in November, 1959.

General Horner took flight instruction at Iowa City in an Aeronca Champ and soloed in 1958. In November, 1960, he completed training in a F-100 which he then flew on assignment in England. He was a F-105 instructor pilot and maintains proficiency in various modern fighter aircraft including the F-4, F-15 and F-16.

His military career has included flying 111 combat missions over North Vietnam. He has held a number of command positions and in May, 1987, was promoted to lieutenant general. His service has earned him many awards and decorations including the Distinguished Service Medal, Distinguished Flying Cross, Presidential Unit Citation, Combat Readiness Medal and Vietnam Service Medal.

In 1990 and 1991, General Horner served as forward commander of U.S. Central Command and the commander of U.S. Central Command Air Forces during the Persian Gulf War. He assumed command of all U.S. and Allied air assets for the duration of Operation Desert Shield and Desert Storm. His command and the efforts of the troops are credited with the Allied victory and a minimum loss of American lives.