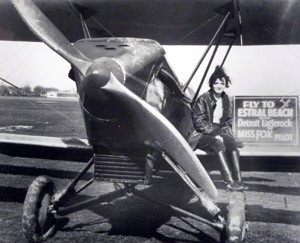 Born in 1904 at Callender, Iowa, Ila was one of twin girls. At the age of 11, her family moved to Pella where she graduated from high school. She attended Pella Central College through her sophomore year and then finished her degree at the University of Iowa.

Following graduation she worked as a recreational director in Davenport. Most of her money went for flying lessons. She even traded free flight time by promoting flying for “Rusty” Campbell at the nearby Moline Airport.

On September 1, 1929, Ila became the first native Iowa woman to receive her pilot’s license. Ila was also the first Iowa woman pilot to join the Ninety-Nines, an international organization of female pilots. At the personal invitation of her friend Amelia Earhart, who founded the Ninety-Nines, Ila became one of the charter members in November, 1929.

In the 1960s, Ila’s interests and energies were concentrated on saving the Atlantic Ridley, the world’s most endangered species of sea turtles. Her pioneer efforts have earned her the title of “Turtle Lady.” Living on Padre Island, Texas, Ila continues to give turtle programs and lectures to school children and island tourists.