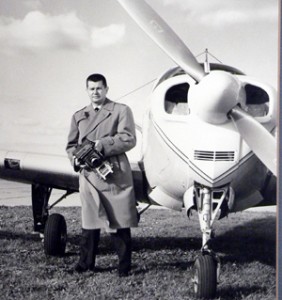 Don was born in Fort Dodge, Iowa on March 23, 1917. He is a University of Iowa graduate who began working as a photojournalist in 1940. During World War II, he served as a primary flight instructor for the U.S. Navy and flew about 1300 hours in that capacity.

In 1946, Don combined his talents of flying and photography which brought him national recognition as a photojournalist and skilled pilot. For the next 12 years he worked for the Des Moines Register and Tribune as a full time pilot/photographer. Trained in both acrobatics and low altitude flying he mastered the technique of taking prize winning aerial photographs while being solely responsible for piloting the aircraft. From the air, his camera documented Iowa life, the people, tragedies and landscape.

Don’s photographic work is acclaimed as some of the best in the 20th century. His photographs have been featured in American Magazine, Collier’s, Fortune, Coronet, Time, Pageant, Woman’s Home Companion, Holiday and Life. He shared a Pulitzer Prize for News Photography in 1952.

Following his flying days, Don worked as an insurance executive. In the early 1980s, he instructed photojournalism at Drake University. Many of his photographs are now featured in his first published book, “Holding the Moment.” One section of the book is devoted to the Iowa portraits he captured while flying for the Register. Don has logged over 5000 flying hours in his lifetime. He still lives in Iowa, making his home in Des Moines.