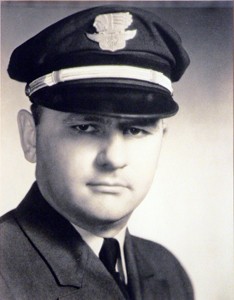 John was born July 29, 1904 in Waterloo, Iowa. He constructed the first airport in Waterloo in 1927 and later became the first manager of the Waterloo Municipal Airport.

In 1928, he gave his first son, Clyde, airplane rides, making the infant the youngest person to ever fly in the state of Iowa. From 1929 to 1931, John flew one of the first air mail routes for Boeing Air Transport between Salt Lake City, Utah and Cheyenne, Wyoming. He was a private pilot to Assistant Secretary of Commerce from 1931-1933 during which time he helped charter all existing air routes and airports in the United States. From 1934 to 1936, he flew for TWA.

About 1936, John went to work in sales and testing for Douglas Aircraft in Santa Monica, California. On June 8, 1938, he was a co-pilot on the maiden flight of the DC-4, at that time the largest transport plane in the world. Soon after this flight John became the chief test pilot of that plane. On January 23, 1939, during a demonstration of the DB-7(a Douglas attack bomber) for a French Air Force delegation interested in purchasing it, the plane failed. Parachuting at a low altitude, John’s chute did not open and he was killed.