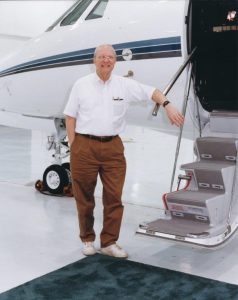 John Langer was born in Denison on February 7, 1936. At Denison High School, he studied as an aviation mechanic apprentice before graduating in 1954. He earned his private pilot’s license at age 17. He served in the United States Air Force from 1954-1958. His duty assignment and training aircraft were at Council Bluffs, Iowa, where he served as flight instructor for the SAC Aero Club of Offutt AFB, Nebraska.

He worked for Gregory Aviation in Omaha, Nebraska, from 1959-60 before working for Western Contracting Corporation as co-captain of a Douglas B-26, flying executives to all 50 states, Canada, and Mexico.

Later, he worked for Ling-Temco-Vought Corporation before beginning work in 1977 for General Dynamics Corporation, the third largest defense contractor in the United States. In March 1980, he captained the first corporate flight in the modern era between Egypt (Heca) and Israel (LLGB). In 1996, he became Director of Corporate Flight Operations, remaining in this position until retirement in 2002. He received an award from the National Business Aircraft Association (NBAA) Flying Safety Awards program in recognition of 3,849,366 miles as pilot in command on December 31, 1983 and another NBAA Safety Award for 20,000 hours as pilot in command on December 31, 2000. He initiated cooperation with Corporate Angel Network to provide cost-free transportation to cancer patients for treatment.

He has logged more than 24,000 hours of accident and violation-free flight time and piloted 111 individual aircraft types.