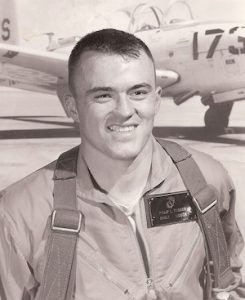 Philip Larry Turner was born in 1938 at Red Oak, Iowa, and grew up on a farm near Elliott. After graduation from Stennett High School, he attended Iowa State University and University of Nebraska Omaha where he was a member of ROTC. After graduation, he enlisted in the US Marine Corps and attended Officer Candidate School in Quantico, VA.

Second Lieutenant Turner’s initial flight training concluded with a fixed wing airplane solo in a T-34 on April 24, 1963. He immediately moved on to rotor wing training, ending with a helicopter solo flight in a Bell TH-13M on March 5, 1964. He was also trained to fly the Sikorsky UH-34D helicopter that he would eventually fly in Vietnam. He earned his Wings of Gold on April 28, 1964, and was deployed to Vietnam in August 1965. First Lieutenant Turner flew Sikorsky UH-34D helicopters with Marine Medium Helicopter Squadron Three Six Two, “The Ugly Angels,” until December 1966. He was shot down 8 times and awarded 29 Air Medals and a Purple Heart. Upon return to the States, he was promoted to Captain.

In July 1967, he retired from the military and moved his family to Elliott, Iowa. He began Turner Copter Services Inc. doing crop spraying. He also offered heavy-lift operations with a helicopter similar to the one he flew in Vietnam. In 1977, he purchased a Sikorsky S-58J. He did hundreds of jobs lifting equipment all over the Midwest, used his helicopters to transport entertainers and politicians, and flew to local hospitals as Santa Claus to visit sick children.

Larry’s flying continued until 2013 at an Ugly Angel Reunion in Oklahoma when he piloted for the last time in a refurbished Sikorsky UH-34D helicopter that he had flown in Vietnam. Larry Turner logged more than 20,000 flight hours in multiple aircraft and donated time and money to refurbish helicopters to be displayed in museums.