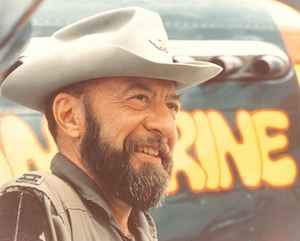 Burns Maxwell Byram II was born June 1, 1924, at the family farm south of Chariton. His family later lived in Rock Rapids and Toledo.

After graduation from Toledo High School in 1942, he enlisted in the Army Air Corps. He participated in 30 missions over France and Germany during WWII as a B-24 navigator/bombardier. After the war, he attended the University of Iowa; and received his medical degree in 1951.

In 1951, he and his family moved to Marengo, Iowa, where he began medical practice and was instrumental in establishing a hospital there. He was named Family Physician of the Year in Iowa in 1961.

He retained a passion for flying, especially for the P-51 Mustang that he had seen flying escort for B-24’s during WWII. In 1954, he attained his private pilot’s license. Over the following years, he attained multiple ratings and acquired several aircraft including a P-51 Mustang, Tangerine. Dr. Byram became a FAA Airman Medical Examiner and was a member of numerous aviation and professional organizations. He became known in Iowa as the “flying physician.”

On June 4, 1978, Dr. Byram was killed when a P-51 he was ferrying from Guatemala to the United States for a friend crashed in Mexico. After funeral services at Marengo, he was buried in Spring Hill Cemetery in Lucas County. His tombstone bears the image of a P-51 Mustang.