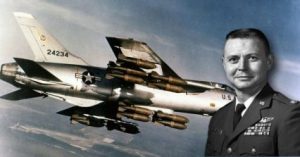 Merlyn Hans Dethlefsen was born June 29, 1934 at Greenville, IA. He was raised in Royal IA and graduated from Royal High School in 1951 at the age of 16, with honors. He attended Iowa State University for two years. He attended the University of Omaha, earning a business major degree in 1965.

He joined the United States Air Force in 1953 and was commissioned through the aviation cadet program in 1955. He served as Navigator on C-124 Globemaster transports at Dover Air Force Base from February 1957 to January 1959, entering Undergraduate Pilot Training at Bainbridge Air Force Base.

After receiving his pilot wings in February 1960 and attending combat crew training, Dethlefsen flew F-100 Super Sabres with the 9th Tactical Fighter Squadron before deploying to Southeast Asia in October 1966. He flew F-105 Thunderchief fighters based at Takhli Royal Thai Air Force Base in Thailand from October 1966 to June 1967. Military awards included ten Air Medals and the Distinguished Flying Cross.

On March 10, 1967, Dethlefsen, flying the number three of four F-105 aircraft, flew ahead of a strike force of 72 fighter-bombers heading to the Thai Nguyen Iron and Steel Works. Their job was to attack the surface-to-air missile complex, antiaircraft guns, and the ring of automatic weapons guarding the target. On the first pass, his flight leader was shot down by 85mm AAA fire and his wing man was forced to withdraw with severe damage. Dethlefsen took command of the flight while fending off MiG attacks and responding to his own battle-damaged aircraft. As he maneuvered, he evaded an intercepting MiG-21 by flying into heavy enemy antiaircraft fire. His F-105 was severely damaged, but despite his nearly crippled plane, Dethlefsen made repeated strikes against the enemy's defensive positions. Evading a second MiG, Dethlefsen dove through the obscuring haze to locate the missile complex and was again hit by flak. Making a final bombing attack and a strafing run with 20 mm cannon fire, Dethlefsen completely destroyed two missile sites with his badly crippled plane before returning to base.

His courage in the face of enemy fire earned him the Medal of Honor on February 1, 1968. He became the third of 12 airmen so honored during the Vietnam War.

He retired from the Air Force in 1977 with the rank of Colonel. Dethlefsen passed at age 53 on December 14, 1987 and is buried at Arlington National Cemetery.