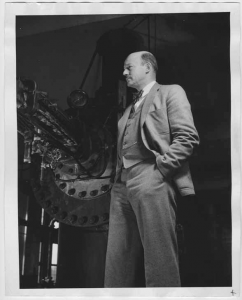 He obtained an appointment to MIT (Massachusetts Institute of Technology) for graduate training and to set up a technical program to study the development of aircraft as a naval weapon. In 1914, after a year of study of aerodynamics and wind-tunnel testing in Europe, he persuaded M.I.T. to let him establish and teach a course in aeronautical engineering and aviation design. Hunsaker began construction of a wind tunnel that enabled experiments with airplane stability. He was awarded MIT’s first doctorate in aeronautical engineering in 1916.

In World War I, he was called to head the Aircraft Division of the Navy Bureau of Construction and Repair. He had responsibility for the design, development, and manufacturing of all naval aircraft, whether airplanes, seaplanes, or airships. By the end of the war, Hunsaker had overseen the construction of more than 1,000 flying boats. Hunsaker also had responsibility for the development of lighter-than-air craft and construction of numerous non-rigid airships for submarine patrol.

In 1918 he was charged with two special projects: To build a helium filled rigid airship and to design and build a flying boat with the capability of crossing the Atlantic. More specifically the aircraft was intended to combat submarines, operating from land bases. The flying boat became known as the NC (Navy Curtiss). The largest aircraft in the world at the time, with four engines and a crew of six. He was also largely responsible for the development of the U.S.S. Shenandoah, the Navy’s first lighter-than-air vessel, a rigid airship that was intended for aerial observation and strategic bombardment. He developed a number of airplanes and methods of launching and returning them to the decks of ships. Hunsaker helped develop one of the nation's first torpedo planes.

He also worked with Bell Telephone Laboratories to develop a radio communication system for aircraft. This system informed pilots of weather on their routes. He later joined the Goodyear Tire and Rubber Company as vice-president for the newly formed Goodyear-Zeppelin Corporation to develop a transatlantic airship passenger service. Two 785-foot dirigibles were built for the navy—the Akron and the Macon—each of which could store and launch 5 small fighter aircraft.

He played a key role in the founding of the Naval Supersonic Laboratory with its large supersonic wind tunnel.

For his service in World War I, Dr. Hunsaker was awarded the Navy Cross and after World War II, he received the Presidential Medal for Merit. He was awarded the Daniel Guggenheim Medal, the Wright Brothers Memorial Trophy, the Godfrey L. Cabot Trophy, the Langley Medal, the Gold Medal of the Royal Aeronautical Society, the Navy Award for Distinguished Public Service and membership in the French Legion of Honor and others.

Jerome Clarke Hunsaker died at the age of 98 on September 10, 1984. His career had spanned the entire existence of the aerospace industry from the very beginning of aeronautics to exploration of the solar system.