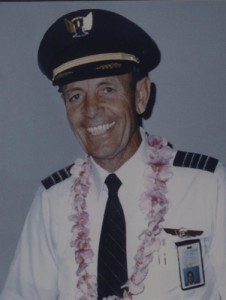 Clyde Cable was born May 14, 1928 in Waterloo, Iowa. Shortly after his birth, he became the youngest person ever to fly in an airplane when his father, well-known aviator and first inductee into the Iowa Aviation Hall of Fame, John Cable took him for a ride in his airplane.

While attending college in California, Clyde worked at Cable Airport, owned by his Uncle Dewey, to pay for flying lessons. He also worked for Douglas Aircraft Company before joining United Airlines in 1951.

During his 37 years with United, he received two Awards of Merit. The first was for his work in implementing, administrating and instructing the Cockpit Leadership Resource program, a program so successful that it is now used by all major carriers in their pilot training. The second was his work in the transition of United and Pan American pilots after United purchased Pan American’s pacific routes. He was also chosen twice as Pilot of the Year by his peers.

A member of the International Aerobatic Club for 30 years, Clyde has been instrumental in standardizing the judging program used at all contests. He has taught aerobatic judging all over the United States.