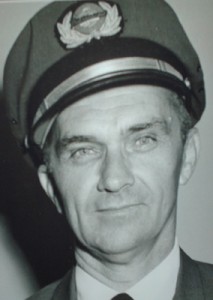 Delbert Clayton was born in Fontanelle, Iowa. As a high school student, he was obsessed with flying. So much so, that in July 1930, a mere nine months after the stock market crash of 1929, he convinced his father to spend $1,000 for an OX5 Travelair and 20 hours of flight instruction.

Clayton earned his pilot’s license in 1931 and was determined to have a career as a pilot. He spent most of the 1930s working with small airlines in Iowa as an independent operator. One of his first jobs was as chief pilot with Des Moines Airways. He barnstormed around Iowa, hitting the county fair circuit and granting rides to the curious public for $1 per ride.

In 1932 he received his Transport License. In 1934 he bought a Piper Cub and went to Cram Field in Davenport, where he started a flight school and became the first Piper Cub distributor in eastern Iowa and western Illinois.

In 1940 Clayton received his Instrument Rating, a move that led to a 33-year career with Braniff Airways. Among his accomplishments at Braniff was a 1949 flight to Mexico City, the first airmail flight to that city. He retired in 1973.

Clayton was a pioneer, introducing commercial aviation into the lives of everyday people.