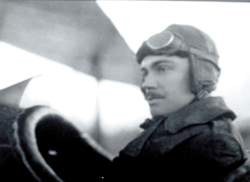 Born in 1889 in Davenport, aviation inspiration came early to Frank Wallace when he watched Eugene Ely make his first flights in 1910.

In those early days, Frank dreamed of an airport with a flying school and hangers for area planes. He raised the financial backing and opened Wallace Airfield in 1919, the first airport in the Quad-Cities.

To promote their airport, Frank and his brother and partner, Fred, hosted air shows where they provided aerial stunts. A flight school was opened  and more than 70 students were taught to fly. By 1920, the airfield had four hangers and a mechanic on duty 24-hours a day. Frank and Fred purchased the rights to the unmarketed Blackhawk biplane and began to manufacture them.

In 1926, Frank was instrumental in the creation of the Monocoupe. Don Luscombe, a student of Frank’s, with the help of mechanic Clayton Folkerts, built a prototype of the plane on Wallace Airfield. It featured a steel fuselage, a single wing structure and an enclosed cockpit. The plane was a huge success.

Due to a leg injury suffered in a plane crash, his last flight in the cockpit came in 1944. He died in 1965, leaving a legacy of daring and innovation as his contribution to the aviation dream.