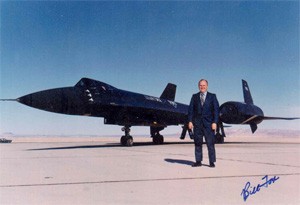 Bill Fox was born and raised near Osage in North Central Iowa. He served in the Naval Aviation Branch of the United States   Navy aboard the aircraft carrier U.S.S. Oriskany in Korea. Upon receiving his honorable discharge, he attended Iowa State College of Engineering and the University of Minnesota.

Bill started his career at Honeywell in the Engineering Flight Test Division which took him to St. Louis, White Sands, and California for various ongoing aircraft test programs. While in California, he was assigned to the highly classified Blackbird program, which was still in the concept phase. He was assigned to Area 51 to take part in the developmental flight test program. He soon became involved with nearly every system on the aircraft.

Retired since 1988, Bill spends much of his time giving presentations about the Blackbird.