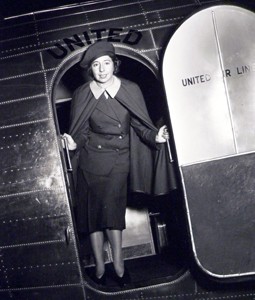 Born on September 22, 1904 on a farm near Cresco, Iowa, Ellen Church graduated from Cresco High School, became a registered nurse and for a short time was the school nurse at Cresco.

Ellen was interested in aviation and took flying lessons. In 1930, Ellen approached the president of Boeing Air Transport for a position as a pilot. He wouldn’t hire her in that capacity, but did think one of her ideas had merit, that of placing nurses onboard planes in order to help the public feel more comfortable while flying.

On May 15th, 1930, Ellen Church became the world’s first stewardess. These women not only saw to the passenger’s needs but also hauled luggage on board, screwed down loose seats, fueled planes, and helped pilots push planes into hangars. For these services, they earned $125 a month.

After an automobile accident, Ellen resumed her nursing career. She became a captain in the Army Nurse Corps during World War II. She earned the Air Medal for her work during numerous evacuation missions.

After the war, Ellen was hired as nursing director at Terre Haute Union Hospital, later became a hospital administrator. She married Leonard Marshall in 1964.

She died in 1965 from a horseback riding accident.