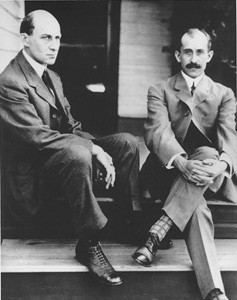 On December 17, 1903, a cold, blustery winter day at Kill Devil Hills, North Carolina, Orville Wright embarked on the first flight of the first powered aircraft in the history of man’s flight. With his brother Wilbur running along side, the aircraft traveled down rails constructed on the beach. It lifted into the air and 120 feet later dropped back to earth. The flyer had been airborne for twelve seconds. Twelve seconds that changed the world! The impossible suddenly became possible! Man could fly!

The Wright brothers lived in Cedar Rapids, Iowa for approximately three years of their lives, during which time their father gave them the toy that prompted their early experimentation with flight. The brothers also owned land in Adair County which was sold in 1902.