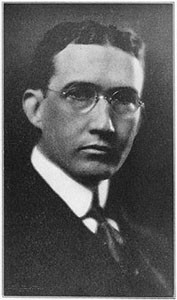 Glenn Luther Martin, born in Macksburg, Iowa in 1886, was one of the pioneer airmen of the country. An early interest in kites and gliders was enhanced by the achievements of the Wright Brothers at Kitty Hawk. By 1909 Glenn Martin had built a pusher-engine biplane and taught himself to fly.

In 1912 he flew a historic flight to Catalina Island and back, demonstrating the long-range possibilities of aircraft. He built the first multi-passenger seaplane, the first twin-engine bomber, designed the first honeycomb structural supports, the first self-sealing gas tanks and the first power operated gun turrets.

At the young age of 26, Martin started his own business, the Glenn L. Martin Aircraft Company, and proceeded to build aircraft specializing in heavy multi-engine planes to be used as bombers. He was soon designing and building planes for both the Army and Navy. For developing airplanes, such as the “China Clipper” flying boat and the B-26 “Marauder” bomber, he received the Daniel Guggenheim Medal in 1940. He remained President of his own company until his death on December 5, 1955.

The Martin Company provided training to other aviation manufacturers including William Boeing, Donald Douglas, Lawrence Bell, and James McDonnell. The company is still in business today as Lockheed–Martin.

Glenn Martin was inducted into the National Aviation Hall of Fame in 1966.