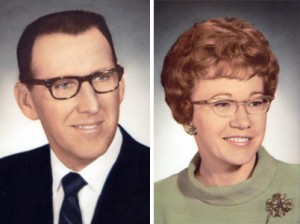 Russell and Dolly Zangger have owned, financed and operated Zangger Airfield on the family farm in Larchwood, Iowa since 1949. The airport boasts four runways, 24-hour service and the first airpark in Iowa featuring five homes with direct private hangar access to the four runways.

Russell, born in Larchwood on February 22, 1922, received his Private Pilot’s Certificate in 20 days from start to finish. In 1953, he received his Flight Instructor rating and began giving lessons. Since he only had a private pilot’s license and not a commercial license, he was unable to charge for lessons he gave.

Born in South Dakota on August 26, 1924, Marie (Dolly) was the first female in Iowa to make her initial solo flight in a 125 Swift after receiving only 6 hours of dual instruction. In 1958 she opened and operated the first aviation ground school in northwest Iowa not associated with a college, at the couple’s home. Between the two of them they have trained nearly 3000 students.

Russell and Dolly became members of the Civil Air Patrol in the 50s. They received the Meritorious Service Award and medals from the United States Air Force for 2,500 hours of active duty at their Ground Observer Post.

The Zanggers have the unique distinction of being the first couple to be inducted into the Hall of Fame. They continue to operate the Zangger airport in Larchwood.

*Dolly and Russell are now deceased