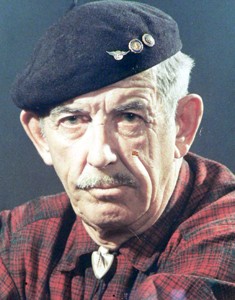 Clifton P. “Ole” Oleson was born in McGregor, Iowa, in September, 1899. His fifty year flying career took him to friendly and unfriendly skies around the world, but always brought him back to Iowa. A born flyer, he was obsessed with flying. At 14, he took his first airplane ride and after just one month of instruction, soloed.

During World War I, Oleson volunteered for the U.S. Army Aviation Section of the Signal Corps. Clifton became the youngest aviator in the Army. He began training cadets who were all older than he.

After his discharge, Oleson started barnstorming and stunt flying for the Curtiss National Exhibition Team. He was a wing walker and would hang from the plane by his teeth. He would also thrill the crowd with his no-parachute plane-to-plane jumping. He flew mail, taught others to fly and promoted aviation. He and his wife Esther, who was also a pilot, established flying schools to promote Iowa aviation and managed airports throughout the Midwest.

At the end of 1940, he was called again into military service, training bomber pilots and flying heavy bomber missions in Africa and Egypt.

After the war, “Ole” managed the Ottumwa Municipal Airport and established the Oleson Flying Service. He was a strong advocate of aviation, having a weekly aviation news column in the Ottumwa Courier and a weekly radio program. He frequently organized Fly-Ins, statewide model airplane meets, and air shows, making everyone more aware of aviation and its application.