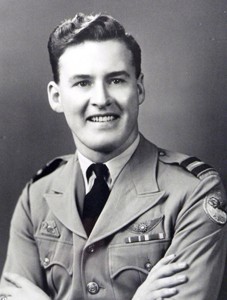 Joining the Army Air Corps in February, 1940, he was commissioned a second lieutenant in October, assigned to Barksdale Field, Louisiana, as a flight instructor.

Bill joined the American Volunteer Group (AVG). “The Flying Tigers” as they came to be known had been created by Colonel Claire Chennault and Chiang Kai-shek to help defend China against the relentless Japanese bombers. During seven months of active duty with the AVG he flew seventy-five missions. After the disbanding of the AVG, Bill returned to Marion to a hero’s welcome. For the next few months he appeared throughout the Midwest promoting the sale of war bonds. In February, 1943 he was commissioned a major in the Army Air Corps. He returned to the Chinese theatre to fight with the Chinese-American Composite Wing, flying sixty-six missions. He was promoted to Lt. Colonel and was awarded the Silver Star, the Distinguished Flying Cross with Oak Leaf Cluster, the air Medal, the British Distinguished Flying Cross and the Fifth and Sixth Order of Chinese Cloud Banner.

At the age of 27, Lt. Colonel Reed become the Commander of the 3rd Fighter Group. On December 18, 1944, he led one of two groups to sweep the airfields around Hankow, resulting in its destruction. The following day William Norman Reed was killed returning from a mission over Pengpu when he was forced to bail out and his parachute did not open. He is buried in Anamosa, Iowa.