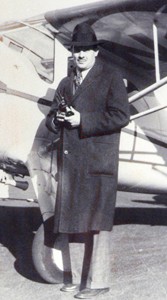 Donald A. Luscombe was born in Iowa City on May 25, 1895. Early in his life, he showed an interest in promoting, writing and advertising.

In the spring of 1917, he volunteered during World War I to be an ambulance driver in France, hazardous duty for which he was cited for heroism. In France, he took his first airplane ride in a French Voisin pusher.

After the war, Don went into advertising in Davenport. He bought a Curtiss Jenny which he quickly learned to fly. Experience in the cumbersome, drafty Jenny lead him to envision an aircraft with an enclosed cabin and side-by-side seats, a plan he took to a group of friends and business people. From this came the formation of the Central States Aero Company, Inc. On October 12, 1926, Clayton Folkerts, a young Iowa farmer became the designer-builder, and the first Monocoupe was built in 1927.

In 1928, Luscombe wrote the book, “Simplified Flying.” He moved to Kansas City as head of a new firm, Luscombe Airplane Development Corporation in 1933, to build the Phantom, the first all-metal light plane and then to New Jersey, to build the prototype of the plane that would become the Silvaire.

Donald Luscombe died in 1965 and is buried in Oakland Cemetery in Iowa City.