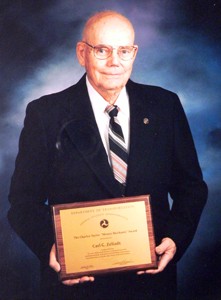 Carl was born in Warren County in 1917. Following his college graduation from Iowa State College in 1940, he took his engineering degree and began working for the famed airplane company, Glenn L. Martin Nebraska Company. In 1944, he enlisted in the U.S. Army Air Corps Cadet Program. A surplus of pilots lead him to take a written and oral exam to become an airplane mechanic. He was assigned to Hondo Army Airfield, Hondo, Texas and became crew chief on heavy multi-engine aircraft.

In 1963,Carl joined the Iowa Army Air National Guard and was appointed Non-Commissioned Officer in Charge of Production Control with the responsibility of all inspections, work assignments and return to service of military aircraft. In 1994, he was presented the “Master Mechanic” award by the Department of Transportation, Federal Aviation Administration for having been in the maintenance field for over 50 years.

He is a charter member of the Silent Knights, Inc., a group of glider pilots in Iowa.