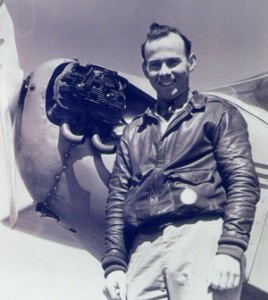 In 1918, at the age of four, Robert Freyermuth was near his birthplace of Muscatine when he saw the love of his life, his first airplane. He soloed in 1933.

At the age of 20, Bob attended the Cleveland National Air Race and was less than content to be just a spectator. He bluffed his way onto the airfield and through a twist of fate was asked to take the place of a parachutist who had been in an auto accident. Outfitted with a large, ill-fitting harness and with absolutely no experience, Bob jumped with 25 others from two Ford Tri-Motors. It went down in the history books as the first mass parachute jump in the world.

In January, 1941 he enlisted in the Royal Canadian Air Force and in 1942 was recruited by the U.S. Army. At Peterson Field in Colorado, Bob was assigned to head a team to define standards and procedures for air personnel training. For the first time in military history, standards were adopted for training pilots, bombardiers, navigators, radio operators and engineers. After its implementation, there was not another airplane accident involving a flight instructor. After active duty, Bob served in the U.S. Air Force Reserves for 27 and a half years.