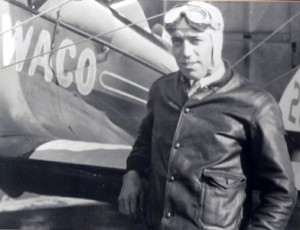 If sports magazines had been regular publications in the 1930s, much print would have been devoted to John Livingston. At a time when flying interests peaked in the United States, John was an accomplished airplane mechanic, pilot, aerobatic flyer and racer.

John was born in Cedar Falls, Iowa on November 26, 1897. He was a self-taught pilot who began flying in 1919. Several years later he began air racing and for a half dozen subsequent years entered national races compiling a record of 80 wins, 42 second place finishes and 15 third places. He was nicknamed the “Pylon Pusher” for the technique he developed that gained him speed and altitude at a pylon turn. His accomplishments were credited not only to his natural flying skills, but also to his mechanical ability. He modified airplanes, clipped wings, covered cylinders and did whatever he could to reduce resistance.

After his racing career, he was a flyer for the Baby Ruth Aerobatic Team. Formations were done in three Wacos tied together with heavy hay rope. John then became a factory test pilot for the Waco Company in Ohio. In 1937 he returned to Waterloo and with his brother “Bite” Livingston, operated one of the largest pilot training schools in the Midwest.

In the early 1970s, Richard Bach published his bestseller, Jonathan Livingston Seagull. The author sent John an autographed copy of the book which said, “To Johnny Livingston, the man who knew all along what this bird was trying to learn.” The book was based on Bach’s observation of John when he was flying an airplane.