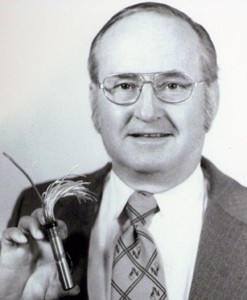 JC Pemberton, a Greenfield, Iowa native, began his aviation career after earning a bachelor of science degree in electrical engineering from Iowa State University. Like the Wright Brothers, like Charles Yeager, like William Piper, it was a career that influenced, changed and bettered the entire aviation industry.

JC has over 30 patents attributed to him. One of the most significant ones was the Scanivalve which is a wind tunnel pressure instrument that revolutionized wind tunnel experiments. Prior to JC’s Scanivalve, a typical wind tunnel test would take two weeks just to gather the photographic data needed for calibration. JC’s new instrument could span 48 different pressure points in just two seconds. All of this meant less cost for jet and military aircraft research and development.

In the fall of 1955, JC Pemberton founded Scanivalve, Inc., and began manufacturing his first patented product, the Model D Scanivalve. He then proceeded to design and obtain patents for other models to meet the various requirements needed in the aerospace industry. His creative genius has affected everything from flight tests and turbine tests to process controls and electronic pressure scanners.