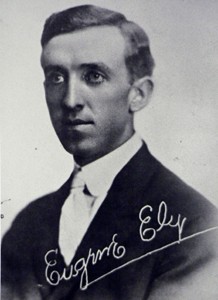 Eugene Ely’s daring bravery and love of flying lead him to pioneer the world of flight from a ship. Born in Williamsburg, Iowa in 1886, Eugene became one of the premiere pilots during the early days of flying. Self-trained as a race car driver and mechanic who worked in the Davenport area, Eugene loved speed and anything mechanical.

He moved from Iowa in 1904 to settle in California. His first adventure with an airplane was in 1909 when he purchased a Curtiss airplane. Flying was just a novelty in the early 1900s and Eugene quickly learned that money could be made by exhibition flying. He is credited with introducing thousands around the country to this new form of transportation. In Iowa he was the first person to fly at Sioux City and while flying in Davenport in 1911 he was one of the first to take a passenger on a flight. He became part of the Curtiss Exhibition team and his flying brought him national attention.

In 1910 he was approached by the United States Navy about the challenge of flying an airplane off of a ship. On November 14, 1910, Eugene Ely became the first pilot to make a successful unassisted airplane takeoff from the deck of a ship. Despite damaging the propeller in the takeoff he kept the airplane airborne for two and a half miles. He made history again on January 18, 1911, when he successfully landed an airplane on a ship, the U.S.S. Pennsylvania. He is also credited with designing the arresting gear that helped stop the airplane upon landing. This principle is still used today.

On October 19, 1911, Eugene made his final flight at the age of 25. Before a crowd of 20,000 at Macon, Georgia, he failed to pull out of a spiral and died when the airplane crashed