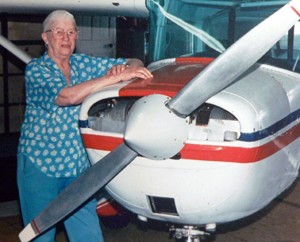 Nellie Vos Ruby was born on a farm near Galesburg, Iowa on November 16, 1919. With only an eighth grade education she has worked her whole adult life in aviation. She was the first Iowa woman to receive an A & P mechanics license and is still the only woman in the state to hold an Inspection Authorization rating.

For a year after WWII, Nellie and her husband, Glenn searched southeast Iowa to find an airport to operate. Finally they located land suitable for a runway near Sigourney and after working out a deal with the owner, went to work developing a viable airport.

Nellie received her private pilot’s license in 1948 on her 10th wedding anniversary. After receiving her instructor’s license she gave a total of 705 hours of dual from 1963 to1971.

Since operating an airport also meant fixing and repairing aircraft, Nellie and Glenn worked under the supervision of three different certified airplane mechanics. Finally both attended the Acme School of Aeronautics in Texas and passed the test for their A & P license. But still they had to take the airplanes elsewhere for the annuals. That is, until Nellie passed the FAA test for an Inspection Authorization in 1976.

Even after her husband’s death in 1990, Nellie still operates the Sigourney Airport, trades airplanes and does mechanic work.