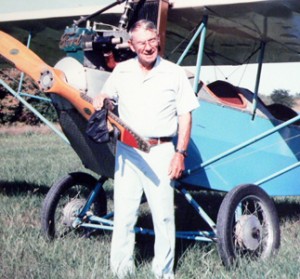 Born on February 22, 1914, in Dow City, Iowa, Louis “Andy” Anderson turned his airplane hobby as a youngster into a lifetime devoted to flying. After moving to Denison with his family, Andy purchased a partially completed glider. With ingenuity, his bedroom as a work shop, Indiancloth and tacks, he completed the glider. He not only flew it but was successful at teaching others to fly it.

As a young man he built two biplanes and learned the art of piloting an aircraft. He was one of the earliest crop sprayers, introducing the technique along the Missouri River in western Iowa. From 1949 to 1951, he served as the first operator of the Denison Municipal Airport. In this position he instructed pilots and flew charter flights.

In later years he moved to Missouri and opened an airport in Mansfield, which he eventually presented to the community.

Andy has restored or built over 175 aircraft including replicas of the Wright Brothers first glider and the 1903 Wright Flyer. He still assists with restoration projects at his home in Bates City, Missouri.