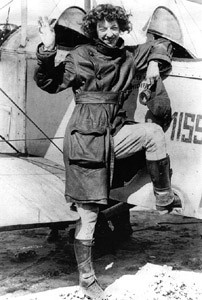 Neta Snook was born on February 14, 1896, in Illinois but during her teens moved to Ames, Iowa with her family. Growing up her father interested Neta in driving, automobiles, things mechanical and fostered an ability to fix and make things. She attended Iowa State College where she studied the expected female curriculum of home economics, but her electives reflected her true interests. She enrolled in mechanical drawing, internal combustion engines and the repair and maintenance of farm tractors.

In 1917, she was the first woman accepted to the Davenport School of Aviation. A tragic flying accident closed the aviation school. Neta was next accepted to the Curtiss Aviation School at Newport News, Virginia. WWI interrupted that instruction and it wasn’t until the spring of 1920 that she soloed. The aircraft was a Canuck that Neta rebuilt in Ames becoming the first woman in Iowa to rebuild an airplane. Throughout that summer she barnstormed in Iowa and surrounding states.

The onset of winter made flying in Iowa impossible so Neta shipped her Canuck to California and looked for work in the milder climate. She secured a job as a flying instructor and commercial flyer on an air field owned by Iowa native Bert Kinner. On January 3, 1921 Neta began giving Amelia Earhart flying instruction.

After marrying Bill Southern and then becoming pregnant, Neta decided to give up flying. On August, 1922, she stepped out of her plane and never flew again as a pilot. In 1974, she authored the book, “I Taught Amelia to Fly.” She died in 1991.