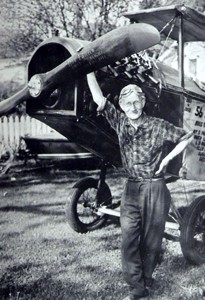 Art was born July 14, 1888 in Burlington, Iowa. At the age of 15 he ran away from home to be a balloonist and parachute jumper. Under the pseudonym Professor Art J. Hart, he made his first balloon jump on September 6, 1903 and while still in his teens became an expert balloonist.

After his marriage in 1909 he was employed by the railroad in Burlington. Most of his spare time was spent building a monoplane. On a spring morning in 1910 he took the monoplane to the Burlington Golf Club and became the first Iowan to make a recorded and witnessed flight with a heavier-than-air craft.

After World War I, Art became interested in the Curtiss JN-4 airplane. He built, restored, flew, bought and sold Jennies throughout the rest of his life. In 1928 he built and sold his own designed plane, the Hartman Air Plane and later started a flying school which continued until 1948. He founded and managed the Burlington Municipal Airport and trained World War II pilots.

He died at the age of 82, after being involved in aviation for nearly 70 years.