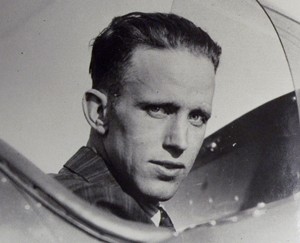 “Bite” was born on February 8, 1903, in Cedar Falls, Iowa where he still resides. He was 23 years old before he learned to fly and at the age of 88, he was still flying and promoting aviation.

Throughout his flying career, Bite has worked to advance the field of aviation. He has instructed, sold and maintained aircraft, barnstormed, participated in air races and tours and been an avid promoter throughout the Midwest.

Bite founded and managed the first airport at Cedar Falls. In 1929, he began managing Chapman Field east of Waterloo where he and his brother John introduced hundreds to flying. They also operated the first regularly scheduled airline, the “Air Express” between Waterloo and Des Moines from 1928 to1929.

During World War II, Bite operated War Training Service programs. After the War, he continued to sell airplanes, adding various models to his inventory and at one time sold 173 airplanes in a five month period.

He is a member of several national organizations including the Quiet Birdmen, Experimental Aircraft Association and the Antique Airplane Association. In 1958, he was accepted in the OX-5 Club of America and later served on its board of directors. In 1978, he was selected as Mr. OX-5 of the Year, a national honor.